Merchants are NPCs that sell their goods and restock on a semi random basis.

Merchants restock randomly according to their Chance and Restock Frequency. LastRestockTick is the last ingameTick that they have refreshed their wares. Currently, Chance is specified as 71, and RestockFrequency is 5 ingame days, or 6,000 ticks. It calls Stat.Random() to find a random integer between half the restock frequency and the restock frequency:[1]

When the merchant is first created, LastRestock tick is set to

the merchant will restock. This means that about 8450-8451 turns (a little more over an ingame week) after the last restock must pass in order to guarantee a restock. The earliest that a merchant can restock is 6,000 turns, with a 71% chance of restocking, or 9,000 turns at a 100% restock if this is the first time the merchant restocks.

Merchants have a chance of spawning Legendary Merchants, loyal to the Merchants' guild. They live in their own lairs, and are always guarded by two random hired guards. All stock will contain the Maker's Mark of the Merchant, which is a random Code page 437 character from 1-254 (in decimal) excluding all alphanumerics, &, ^, and white space.[2] 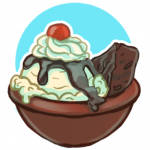 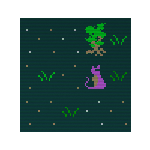